Dandari was established in 1980 by Ernests Spīčs with the goal to preserve and popularize Latvian ethnographic and folklore dances. He introduced a dancing style imbedded with refined posture, the joy of dancing and carefully crafted details. By working with folklore records, the Dandari creative laboratory has reconstructed and interpreted folk dances that have become loved by many folklore lovers. In addition, there are also materials gathered by Dandari themselves, which are used in different programmes – from seasonal and family traditions up to modern folklore theatre. 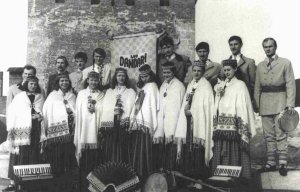 In addition to folk dances, the members of Dandari take part in events of the traditional Latvian festivals that are connected to the ancient Solar calendar and reflect the passage of the sun in the sky. Each season has its characteristic traditions, songs, and games. There’s the time of harvest and when souls of the dead roam the earth, the traditions of mask processions in autumn and winter, swinging and greeting the sun in Easter and the most important festival of the year – Midsummer solstice when the nation celebrates all night, helping the world to start a new life cycle.

The uniqueness of Latvian regions is reflected in the different costumes of the members and special attention is paid to their ethnographic preciseness. Costumes like these were worn up to the 19h century when urban elements started to slowly enter the everyday life but a piece of pride were the handmade beautiful skirts (brunči), embroidered shirts and woollen shawls (villaines) which were adorned by silver brooches (saktas). The dancers wear the national costume from their native region with pride. We strive to follow the peculiarities characteristic to the native region of the songs and dance steps.

Dandari has always had good musicians who not only know the repertoire of folk dances but also gladly dance themselves. This joy of dancing is also felt as they enthusiastically play the music both for the dancers and when recording the songs. The musicians of Dandari try to imitate the playing style of the old folk musicians. To accompany the dances, the musical instruments most characteristic to the end of the 19th century are used – violins, zithers, mandolin, and contrabass. Ancient Latvian lutes (kokles), bagpipes and pipes are also not forgotten.

Ethnomusicologist and folk music expert Ilmārs Pumpurs was the leader of the group for 15 years and established the folklore dance and music festival „Pa Pēteriem”, as well as introduced the yearly creative workshops. For Dandari many projects and trips have happened due to the national and international scale projects established by him, as one of these the learning partnership project „Learning from roots” can be mentioned.

Collapse player
Back to top